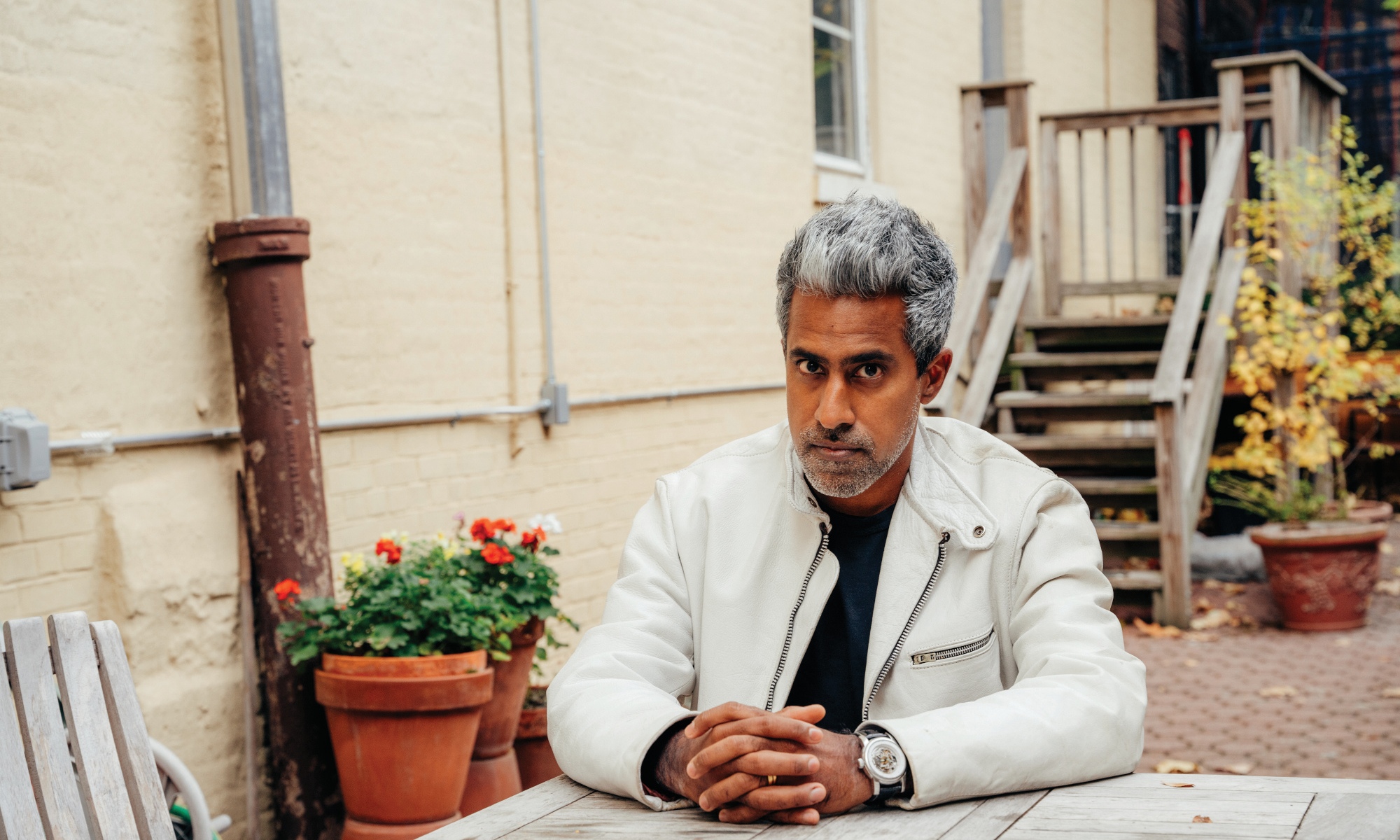 Photo above of Anand Giridharadas, photographed by Meghan Marin in Brooklyn for Gossamer.

I wanted to work at a charity since I was in high school. I had no idea what I was going to do; I just wanted to get in the door and help people, like a lot of white girls. I was the more low-key, Christian version of a Basic Bitch: I wore a MAKEPOVERTYHISTORY wristband, used my musical talents in the worship group, sponsored a child, went to Uganda, attended my University bible study group, and volunteered as a Sunday School teacher at church. Working at a charity was a dream, and it was also part of the aesthetic.

When I got my first job at a not-for-profit in 2015, I knew something had shifted within me. My purpose for showing up at work was visceral – I was doing that illusive thing so many Christians dream of: “making a difference”. My labour was now at once an extension of my faith, an outward expression of my morals, a self-satisfying stroke for my ego when I met people for the first time, and a way for me to put into practice my desire to change the world while getting paid.

One of the tenets of charity is that the organisation must employ fundraisers who find people to pay for the service, so the end users don’t have to. I didn’t start off as a fundraiser, but that’s where I landed. Whether because of good will, religious beliefs, sponsorship benefits, altruism, social status, tax advantages, guilt – the money needs to come from somewhere else, and that immensely complicates how not-for-profits function.

People who work in fundraising must do certain things to find this money. Create and maintain networks of wealthy people who are open to their cause. Host events that raise more than they cost. Apply to trusts and foundations who are aligned in their purpose. Work with businesses to leverage their exposure for sponsorship. Convince donors that they are making an impact. It was fascinating work, and I learned a lot as a fundraiser. During this time, my well-meaning intentions started to come up against the hard boundaries of the not-for-profit system. I began to question my own behaviour.

Why did “successful” fundraising often devolve into who you knew?

Why did I nod and smile when well-meaning people said to me, “There’s only so much money to go around, Jemma”?

Why did fundraisers need to chase private income to fund initiatives that were widely regarded as a fundamental right?

Why did I never say what I really thought of those income/expenditure pie graphs?

Why did I talk about “growth” and “legacy” instead of an exit strategy?

91% of donations go to the top 9% of organisations in New Zealand. Why did the gap between the rich and the poor in society also exist between charities? How can organisations that do so much good be predicated on such glaring inequality?

When did good stewardship turn the corner into greed?

And why was no-one talking about this?

I was feeling the familiar tug of cognitive dissonance in other areas of my life as I matured in my late twenties, so I don’t know why I expected my mahi to be any different. I was completely invested in keeping the system the way it was, because I was succeeding in it. I wanted to keep winning, and yet… I was just starting to understand that there were other ways of understanding the world that did not centre around the dominant rhetoric I’d grown up with: whiteness, Christianity and generosity through charity.

Vu Le led the way to the door; Anand Giridharadas handed me the key. I can’t remember if it was his interview with Ezra Klein or Krista Tippett that first floored me, but somewhere around the end of 2018 I found an author who could put words to the tension I was feeling.

I could quote at length from the book that Anand was promoting when he appeared on those podcasts, Winners Take All. Just read it.

Instead, I want to share with you some of the wisdom of his deeply unpopular speech at the Aspen Ideas Festival in 2015. This speech kicked off his journey to publishing that book. He was asked by the organisers to speak on a previous book he’d written; he said ‘yes’, ignored them, and decided to deliver ‘The Thriving World, The Wilting World, & You’ instead. Here are his thesis statements.

The scale of wealth and power that Anand was calling out was unfathomable to me. He was speaking at the Aspen Ideas Festival to people with private jets, twenty-million dollar second homes, their own foundations and “$4,000 parkas”, capable of cutting six figure cheques to a charity they’d just heard of on a Tuesday evening. Back home in Ōtautahi, I was not socialising with or trying to raise funds from people like this.

But the Aspen Consensus was still the same in principle. Anand was naming the elite charade of changing the world: these seemingly “generous” behaviours of the wealthy actually preserve the situations that necessitate their generosity, and furthermore obscure their role in causing the problems they benevolently seek to solve. Anand delves further into ‘why’ this was happening:

“We talk a lot about giving back, profit sharing, win-wins, social impact investing, triple bottom lines… and sometimes I wonder whether these various forms of giving back have become to our era what the papal indulgence was in the Middle Ages – a relatively inexpensive way of getting one’s self seemingly on the right side of justice… Because when you give back, when you have a side Foundation, a side CSR project, a side Social Impact Fund, you gain an exemption from more rigorous scrutiny…

“The indulgence that results spares you from questions about the larger systems and structures you’ve sustained that benefit you and punish others. Weak banking regulations and labour laws. Zoning rules that happen to keep the poor people somehow very far from your neighbourhood. Poorer safety nets. The enduring and unrepaired legacies of slavery and racial supremacy and caste systems… We here are sometimes at risk, I think, of confusing generosity toward those victims with justice for those victims.

Why was I so struck with this speech, this book, this man and his ideas?

I was on the opposing side of his audience – a benevolent beneficiary, actively encouraging the donations of the wealthy to further a good cause. Most people wouldn’t ask what was wrong with that. But unfolding in parallel as I read Anand’s book was that I had to work within the system that rewarded exactly this type of generosity. To do that, I had accepted that what the wealthy were doing was right: firstly, because their contributions were directly correlated with how successful I was as a fundraiser, and secondly, because that’s what had been modelled to me as being ‘right’ my entire life. I was a privileged white woman with family wealth behind me. I never had to think about the inequity that that wealth greedily preserves: the prioritisation of “charity” and “generosity” over justice.

Anand had helped me to see these two sides were co-dependent – those donating and those accepting the donations. “Our culture has turned businessmen and women into philosophers, revolutionaries, social activist, saviours of the poor,” Anand says. The mutualistic system maintains itself through paternal philanthropy, hereditary hoarding, territorial privilege, unspoken hierarchies, insulating self-preservation and silence. Charities do great work. People give them money. People don’t talk about why this works, or who it benefits.

I was learning about equity and justice, and I was scared. I know exactly why I never spoke up, and why this blog post still seems like a huge risk. If I were to start talking about justice instead of generosity, it felt like I would be actively harming the organisation it was my job to protect and preserve. We were there to build, grow, raise more and extend our services to help more people – it’s very hard to argue with that. As Anand writes on page 160 of Winners Take All, in response to David Callahan’s book The Givers, the New York Times reviewer says, “Many readers will be ready to throw up their hands in exasperation. So now we’re supposed to fret about rich people being too social conscious? What exactly does this guy want?”

“For the greater good to prevail on any number of issues, some people may have to lose a little bit, to actually do less harm, and not merely more good…”

Why were we marketing generosity, when the only change that will truly happen is when we commit to justice and systemic equity instead?

What is my role in “contributing to the disease that I am trying to heal”?

I’m thrashing through this one, and have edited this piece heavily – out of respect and compassion for those still working within the system and literally changing lives for the better, for those the not-for-profit system supports in their most dire time of need, and let’s be honest, for my future job prospects. Not-for-profits will always have a special place in my heart, and they do incredibly important work. One could certainly argue it’s not their role to change the system. I cannot blame any one of them for trying to function competitively within it.

And yet, my safety net of beliefs had once again been shredded by an articulate, socially conscious didact. When pontificating must turn into to action, where then can we begin?

If you’re involved in the not-for-profit sector, here’s how we can start:

And if you’re not?

Anand wasn’t going to help me with any of this. He could barely hold his own cognitive dissonance together in the speech, saying, “I am as guilty as anyone… I often wonder if what I do – writing – is capable of making any difference.” But he was going to create space for my confusion, and give it airtime, to breathe.

I did a values exercise in another area of my work two days before I started writing this blog. I went through the activity and came up with two core values to contribute to the group. One of them was generosity.

With all of this tension buzzing around my head, I still identified more with the warm fuzziness of giving out of the abundance that I have, rather than seeking to address the source and actively redistribute it instead. It’s going to take a while for me to fully reorient myself and start living out the values of justice and equity, clearly.

Friends who’ve read this far will know that I write to figure out what I think, as Joan Didion so eloquently said. I so appreciate hearing that others who’ve created masterpieces like Winners Take All often started off the same way. It’s comforting to see Anand recognise his own complicity in the system he is trying to name and dismantle – this gives me hope that I can continue to wrestle with this idea and do my best to put it into practice now, without waiting to fully shed the cloak of hypocrisy before I begin.

George Monbiot addressed this tension so many of us feel in two lines of a tweet. I hope it inspires you as it did me.

There are only two kinds of human beings: hypocrites and cynics.
No one is morally pure.
Of the two, I know which I would rather be.